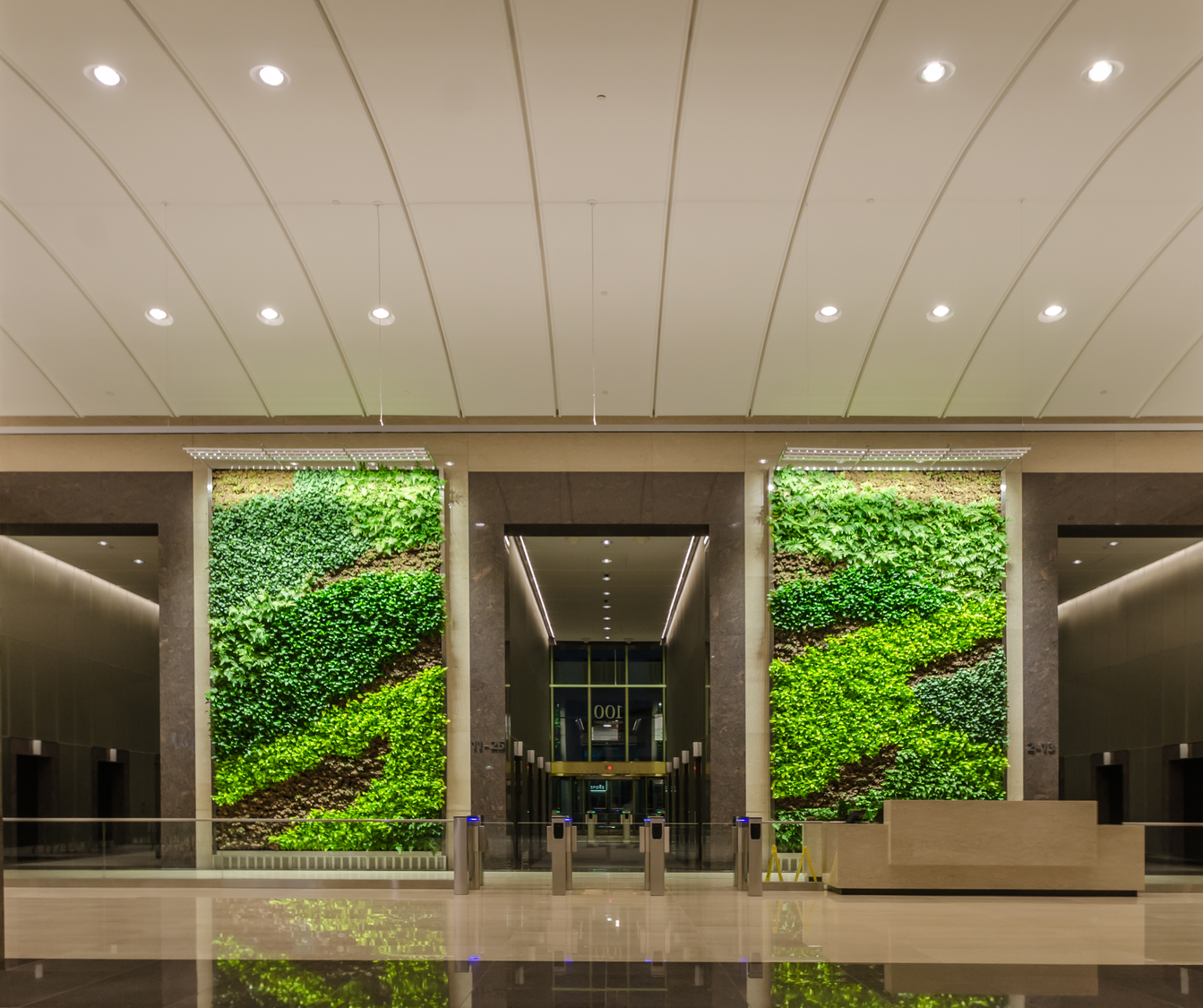 Green Wall at The Exchange

The Exchange at 100 Federal St

What used to be a windswept plaza is now the site of “an enclosed ‘living room’ for Boston to enjoy”, says Robert Brown of Perkins+Will. This project is sited south of Post Office Square in Boston, MA. The glass and steel structure that soars from 30’ to 50’ in the air welcomes nearby office workers and the general public as they traverse between nearby South Station and the surrounding downtown offices.

This winter garden is wrapped on three sides with glass, with views out to the busy Congress Street. The green walls serve as the ‘fourth wall’ of this giant living room, bringing the sense of the outdoors in, which has allowed for this space to be utilized through all of the seasons.

The existing lobbies each have a barrel-vaulted ceiling, large portals leading towards the elevator cabs, and plenty of wall space in between. This space used to be the home to large murals, but the Architects wanted to literally breathe new life into the lobbies with large-scale green walls.

The Design Team’s goal was to have these four large-scale green walls illuminated to suitable light levels to bring a fresh presence to the lobbies, while being bright enough to keep the plants alive. Cityscape’s team recommended 100 FC along the vertical, uniform along the wall if possible. There was daylight within the space, but it was not sufficient to provide 100 FC along the verticals of each of the four green walls.

With the Architects, we explored 3 different light fixture mounting schemes, while keeping the existing ceiling in mind.

Large-scale yoke-mounted LED flood lights could be placed at the position of the existing downlights, 9 feet away, and directly above the green wall. Given the fixture size, a large concealing slot within the existing ceiling would be required. The detail became too large and fussy.

Several rows of slim profile, surface-mounted linear LED downlights were proposed. Because the existing ceiling was a soft and slightly porous ACT, secure mounting, wiring, and access for maintenance would be an issue. We had at one point discussed the possibility of a catwalk above the existing ceiling, but the Owners decided it would be too difficult to access.

Rows of slim profile linear LED downlights bracketed off the wall became the chosen option, due to ease of maintenance and access to wiring.

We tested different manufacturer’s products in digital modeling using accurate photometry to evaluate performance. There were two fixture manufacturers for consideration. We will call them A and B.

Our aiming study recommended that the closer row of fixtures have a medium beam distribution to target the top third of the wall. The two outer rows could have a narrower beam distribution to be able to target the middle and lower portion of the walls. As visible in the false color, most of the light falls along the vertical surface of the green wall, reaching that 100 FC requirement.

We tested the same positioning of light fixtures, but with a different manufacturer, B. Based on the Manufacturer’s product offering at the time, there was only one beam spread available, a wide 120 degrees.  Through aiming studies, we tried to aim the fixtures to target further down the wall. It was simply not possible with the standard beam spread. As much as we would have loved to select Option A and call it a day, Option B happened to be one quarters of the cost of A, and so the overall design team had a strong desire to make B work.

Not quite reaching our illuminance goals, we reached out to Manufacturer B to request some modifications. We discussed our project, and expressed our interest in a narrower beam distribution. B was able to fabricate 30-degree reflector cones. While there was a desire to go narrower, there was a limitation in the manufacturing process at the time.

In the end, above each green wall, there are  four rows of fixtures, with each LED node outfitted with a 30-degree reflector cone. Each row is aimed and adjusted towards a particular section of the green wall.

The top half of the green wall was able to achieve over 100 FC, but the bottom third fell slightly short of that. This was communicated to the landscape team members, who were flexible in curating the plantings to meet those light level needs. 4000K was selected as the color temperature for the green wall light fixtures. In terms of exposure, there was discussion about having 100FC min on the walls for 10-12 hours during the day, to satisfy and promote plant growth.

The green walls have a delightful presence during both daytime and nighttime. The space feels vibrant and inviting. Each green wall is 22’ high, with over 2,000 plants. During events, such as fashion shows, the green walls are visible in the distance serving as a welcoming backdrop from the street view. The green walls bring a vibrancy to the indoor space that can be enjoyed all year round. 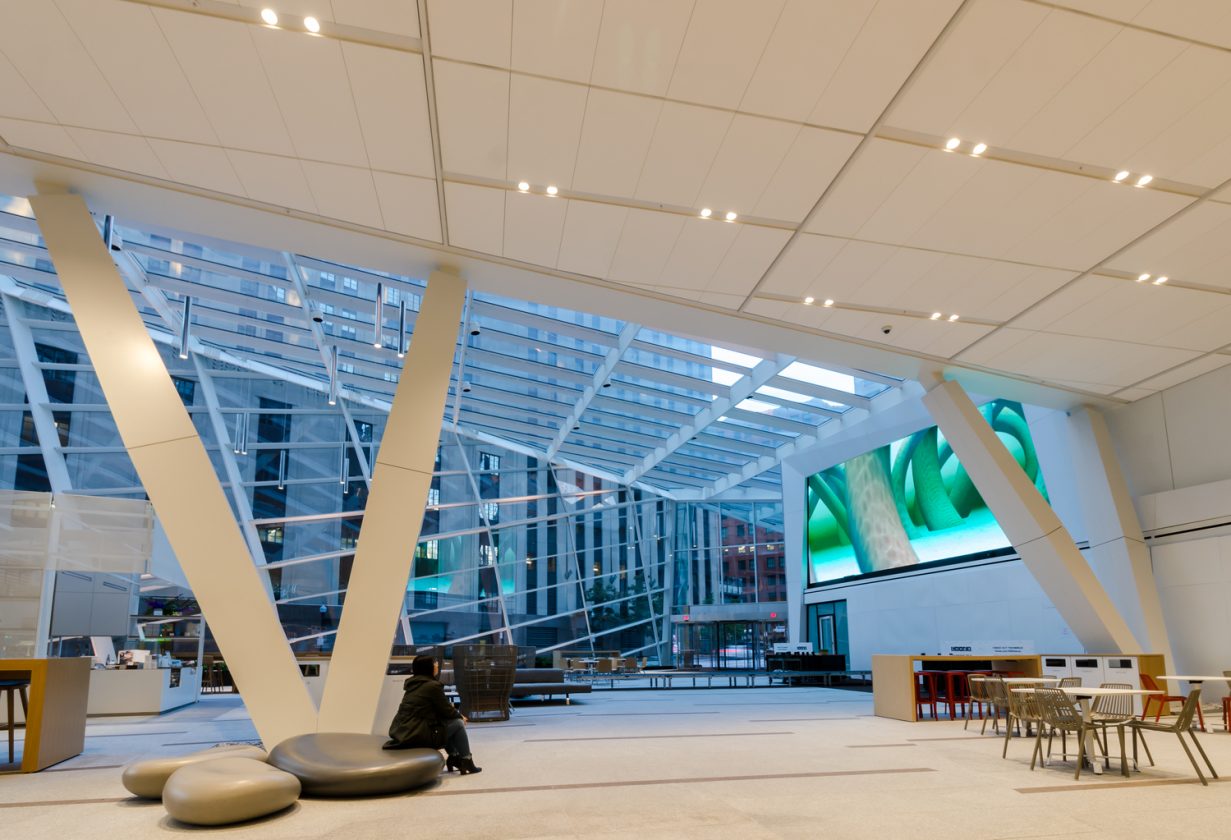 The Exchange at 100 Federal Street