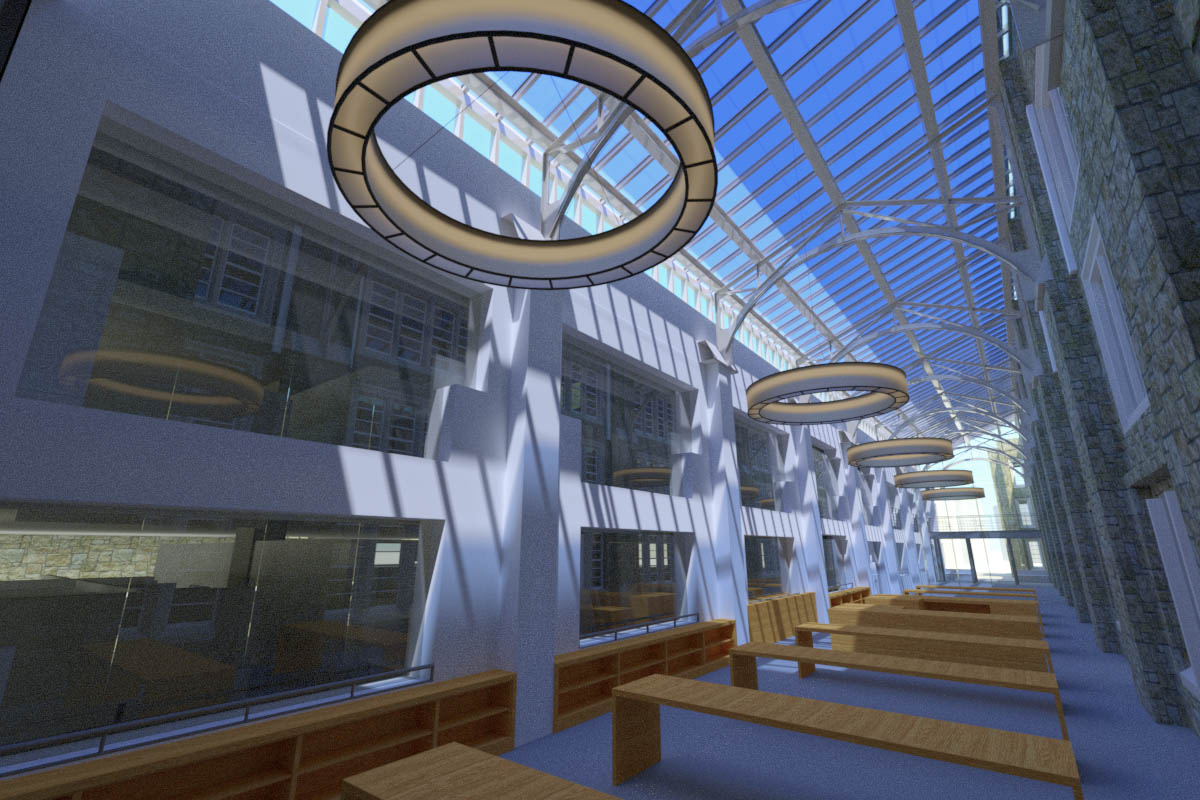 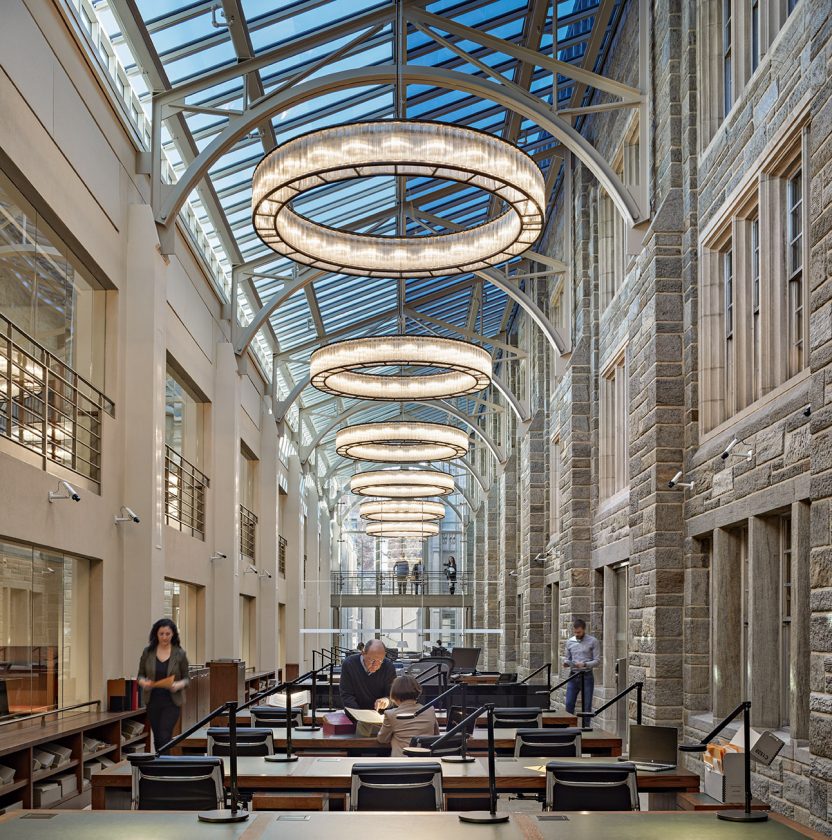 A rare books reading room gets a high-tech upgrade through one of the first electrochromic glazing applications.

In the midst of renovating its main library building on campus, Princeton University decided to locate the rare book reading room within a fully skylit atrium space. Acutely aware that daylight could damage sensitive texts, the architects working on the renovation brought Lam Partners in to develop a daylighting design.

The atrium space had been constructed in the 1980s as a twenty-one-foot-wide airy link between the original early-20th century gothic revival structure and a more modern and understated rear wing, with a green roof housing the stacks. With a sloped glass roof and bris soleil mounted below, this void extends out one hundred and forty feet from the core of the structure, terminating in a glass curtain wall entryway at the east.

Our primary goal was to reduce the amount of sunlight streaming through the glazing, while also maintaining the dynamic qualities of natural light. Too much daylight would damage the rare books, but too little would make the space feel gloomy. Our first design proposal pulled from the annals of classic daylighting solutions: we would close off the middle two sloped, glazing bays, leaving the top bay open to wash light down the original building’s wall; then introduce baffles at the bottom bay and north-facing clerestory to capture low-angled late-day direct sun. It’s a classic, right out of Bill Lam’s seminal text Sunlighting as Formgiver for Architecture.

We presented this concept at our first design session with the architects…and it was roundly rejected. The space is so pure! The glass creates such clean lines, why add more stuff to the space? Besides, large chandelier pendants had already been chosen and specified for the space. Back to the drafting table we went. We began a series of methodical trials, using various parametric climate modeling tools, combining clear, translucent, and opaque panels down the length of the skylight – always mindful of the aesthetic requirements. In doing so, we found that maintaining less than 500 lux at all times throughout the year was quite difficult without also making the space feel gloomy and underlit during the winter months.

The librarians informed us that we were to maintain no more than 500 lux (46fc) of illuminance at any given time. We posited that in considering the amount of damage that could be performed by light on rare books, one should consider an accumulated amount of radiation; certainly, a small percentage of time in which areas in the space would measure illuminance levels above 500 lux would be ok…librarians could simply monitor usage of sensitive texts during mid-summer, when illuminance levels climb the highest. “Yes, that makes a lot of sense”, they said, “but summer is when researchers work and 500 lux maximum seems like as good a target as any.”

Electrochromic glass can change tint level depending on solar exposure to decrease the transmission of light, typically at four levels: clear glass of 60% visual light transmission (VLT), then cut that in half as perceived, which drops to 18% VLT, then half again to 6%, bottoming out at 1% visible light transmission. The transition between states can be as short as 2 minutes in warm weather to 15 minutes in cold weather. After a few site visits to other installations, the librarians decided – we were now designing an electrochromic system with the assistance and direction of Sage Glass.

Up to this point, Sage’s typical installations included relatively simple control strategies. For example, on vertical glazing, a typical solution is to create a series of horizontal bands, so that the upper zone of glass can be darkened, leaving vision glass clear. In skylights, the entirety may be one zone, or subdivided in a few pieces, depending on orientation. However, in our circumstance, it quickly became apparent that grouping the glazing into large zones of control would not really fulfill the criteria set forth of maintaining 500 lux or less, without severely over-tinting for longer than necessary.

The skylight is made up of 72 x 2-foot wide bands of glass. Drawn the long way: a clerestory window faces approximately north, then 4 rows of panels make up the slope, approximately 6’ x 2’ each. By subdividing all panes into 2’ squares, we now had 923 individual cells to work with. This provided us with enough cells to create a dynamic shading mask that could block direct sun from hitting the desk surfaces throughout the day, following the sun as it moves across the sky. This dynamic shading mask, presumably made of 1% tint cells, would shift across the skylight each day, surrounded by bands of 6% and 18% tinted cells to reduce contrast at the perimeter. At no time would more than 90% of the glass be tinted, so as to maintain quality color rendering. This scheme would, in theory, maximize the amount of clear or minimally tinted glass at all times.

To convince the clients of the concept, the Grasshopper definition grew in complexity to simulate the concept geometrically: any cell that intercepted a ray en route to the desks would have the darkest tint; rays hitting the lower sections of walls would tint to 6%, then upper walls, 18%, and any glass that didn’t intercept any rays would remain clear. The grasshopper-created representations diagramed how the skylight would change over time, the data was imported into 3ds Max to create photorealistic visualizations of a full day.

These visualizations were both useful and deceiving. Yes, they showed the clients a realistic idea of the concept, akin to any architectural rendering. Their response however was less jubilation that we’d hoped. First, they found it jerky – the transitions in this first set of representations were abrupt, with little time between each scene state, not realistically showing 2-15min transition times actually found with electrochromic technology. Secondly, the representations made clear that the shapes created were not pure geometries, as the structure in plan is skewed 19 degrees off of true north; and non-symmetrical building forms lead to ‘wonky’ shapes. Clearly, some simplification would be in order.

With hesitant approval from the design team and clients, we next set out on the task of figuring how to actually calculate all possible scene states, and ensure the 500-lux threshold at all times. The parametric definition at this point was only able to change cell states based on solar angle and obstructions; it’s one thing to create a simulation that ‘looks’ like it’s shading the space dynamically, it’s quite another to actually calculate it. This realization was followed by a few months of head pounding.

Would we need to calculate every hour of every day of the year? Of course not – the space is only open from 9am-6pm. It’s also not necessary to calculate every day, because the sun’s movement across the sky in an hour equates to about two weeks of angular distance. So, we’d only need to calculate one day’s worth of hours of when the space is open to users (every two weeks). Finally, the year is symmetrical across the solstices, halving again the quantity of calculations.

Next, how to account for the weather? If a scene in the middle of the summer heavily tints the skylight but the day is overcast, we need to find a way to open it up.  Four separate sky conditions were calculated: sunny, partially sunny, partially cloudy, and fully cloudy. Exterior-facing light sensors tell the system which weather state to load at any given time, based on light levels.

For anyone familiar with radiance calculations, a number of settings exist that govern the accuracy of a given calculation. The more accurate the settings, the longer the calculation. It quickly became clear that running 1,400 calculations at a high resolution would not be realistic given the technology available to us. Instead, we calculated a few sample times at low and high settings and compared the difference: about 40fc on average. We then used a modified threshold of 460 lux with low settings to approximate 500 lux at high settings. Further, radiance calculations that use CIE skies instead of weather data generally have higher horizontal illuminance numbers, which in this model meant that in the very middle of the summer it was simply impossible to achieve 500 lux through 1% tinting; the closest it came was about 560 lux. So, we included some logic that looked for 460 lux generally, but would also not penalize the mid-summer direct sun and further tint the space unnecessarily.

This sophisticated looping algorithm that could visualize, simulate, measure, assess, optimize, and write data crashed…a lot. The process of calculating all 1,400 scene states took well over a month of running on two computers, getting crashes, and restarting – a total headache. Luckily, we were writing the data to a spreadsheet after every completed calculation, so no work was lost in the crash. Finally, the calculations did finish, the data was confirmed, and it was absorbed into Sage’s control software for the installation.

This project presented an opportunity to execute a fundamentally new and unique method for solar control that is perfectly tuned to its locale and adapted to the architecture. Here, in the almost clichéd parlance of Louis Sullivan, “form follows function”. The patterns created are a constantly evolving expression of the exact daylight control needed at each moment. One could easily extrapolate this concept to the scale of the glass towers littering our urban landscapes, which our society has in an abundance.

While the Solar Scene appears natural, like ever-evolving shadow patterns,  design decisions were made and embedded into the algorithm that simulated this effect.  If the patterns were designed, they may be changed, with the potential for maintaining the intended shading effects. The skylight is now essentially a low-resolution media display with 923 pixels; each pixel is capable of 4 shades of blue, and with a transition time of 2-15 minutes. Visiting artists could be commissioned to produce a scene that runs during a particular event, or program text to slowly scroll across the skylight, or even display Princeton’s crest. On gloomily overcast or dark winter days, abstract geometric patterns could slowly morph over time to provide dynamic visual interest. The possibilities are quite literally infinite. This suggests a new medium for architecture – the capacities of high-performance façades to be hybridized, producing both an effect and a performative act.

Finally, regarding the design process, the design tools and products in this project offer the daylighter’s analog to the proliferation of digital fabrication, in which design firms develop the design and produce the final product for a client from the same digital content. In this project, the parametric script in Grasshopper was developed as a projective representational tool – a means to create visualizations of the solar-oriented scheme that conveyed the concept to the client for approval. However, the Grasshopper definition ultimately took on a number of responsibilities, including visualizing each scene state in the viewport, testing each scene iteration with radiance, and exporting the result for each scene to a spreadsheet. This spreadsheet, which ultimately included 1 data point / cell / 11 hours / week / 6 months / 4 weather states,’ was then passed off to Sage, which used that code to drive the skylight controls. The design tool became embedded in the installed control system.

Feedback from real-world use will allow for a return to the simulations to verify whether the myriad assumptions and micro-decisions in fact contributed to an accurate control algorithm. If adjustment is required, the consolidated Grasshopper script can be easily adjusted to accommodate the feedback.

As buildings grow smarter, more often will we see this type of dynamic façade, able to respond to the local climate conditions, and with the capacity to deliver novel and exciting visual experiences. Latent within these systems are critical design decisions that must be made, reviewed, and tested. The design process does not always lend itself to easy access by many, placing the onus on those writing the codes, manipulating the models, and connecting the Grasshopper components with ‘skinny wires”. We are the ones charged with the myriad little decisions with clear and resolute agency.